The Greek tragedy: a perspective on the crisis

The world's markets and media have been consumed by ‘the Greece situation’ in recent times, but how concerned should investors be as the story unfolds?

For investors everywhere, both institutional and individual, the story has been fast-paced and difficult to keep up with. Moreover, the speculation about possible outcomes has been intense.

Of course, no-one knows the eventual outcome or whether there will even be a definitive conclusion. After all, this is a story that has been percolating for more than half a decade now, since Greece's credit rating was downgraded by three leading agencies amid fears its government would default on its debt.

Since then, the Greek situation has faded in and out of public attention as rescue packages have come and gone and as widespread social and political unrest has risen and died down again.

Despite the blanket media coverage of Greece, it is a tiny economy, ranking 51st in the world by GDP in purchasing power parity terms (which takes into account the relative cost of local goods).

On this measure, Greece is a smaller economy than Qatar, Peru and even Kazakhstan, none of which currently feature prominently in world news pages. Its economy is about half the size of Ohio in the USA or New South Wales in Australia and about a tenth of the size of the UK. Even within Europe, it is tiny, representing only about 2% of the GDP of the 19-nation Eurozone.

Greece’s capital markets are small too

As a proportion of global stock markets, Greece is also a minnow. As of early July 2015, it represented about 0.32% of the MSCI Emerging Markets index and just 0.03% of the MSCI All Country World Index. In addition, while Greece’s total debt is large in both nominal terms and relative to its GDP (at about 180%), it still represents only about 0.25% of world debt (Bond) markets.

What about contagion and future downward pressure on asset values?

Most commentators believe that the risk of contagion and severe downward pressure on asset values is much diminished since the peak of the financial crisis. This is for several reasons, including that exposure to Greek debt by both overseas banks and investors is now dramatically lower than it was; the European Central Bank has convinced markets that it will stand by its 2012 pledge to do “whatever it takes” to preserve the Euro and, although tentative, brighter economic times seem to be dawning in other parts of Europe.

Investors seem to agree with the commentators

While no-one knows what will happen next, it can be useful to look at measures of market volatility as a rough guide to collective expectations. A commonly cited measure is the Chicago Board Options Exchange's volatility index, which is sometimes referred to as the 'fear' index. This recently spiked to around 20 in early July 2015 (when the latest Greek ‘crisis’ was in full swing) from around 14 a month earlier. Now, at the end of July 2015, it is back down to around 12.

What is particularly interesting and worth bearing in mind about this, is that these numbers compare to the index hitting around 80 during the peak of the financial crisis in November 2008. Collectively, therefore, the investing world (of which you are a part), seems to agree that we’ve come a long way since those dark days and this can hopefully be of some reassurance to you, if one of the key pillars of your investment philosophy is the same as one of ours; namely, that ‘none of us is smarter than all of us’.

Does that mean we’re out of the woods, then?

Of course, we must all be careful not to forget the risks, difficulties and uncertainties which lie ahead, not just for investors and institutions across the world, but also for the poor, long-suffering people of Greece, whose economic plight is truly difficult to comprehend (the UK’s recession and ‘austerity’ measures have been like a walk in the park in comparison to what the Greek people have had to endure).

From an investor’s perspective, despite the fact that many concerns remain, as ever these are already reflected in market prices, such as in Greek government bonds, the ‘spreads’ of peripheral Eurozone bonds, regional equity markets and the single European currency itself.

So, how should investors move forward?

As always, no individual investor can control what happens in financial markets, so in the face of short-term volatility and falling asset prices, instead they should focus on both the long-term rationale for holding their investments and the things they can control, including ensuring they have a robustly structured portfolio which can protect them against some of the risks presented by the Greece situation.

Indeed, if an investor feels any anxiety, rather than panicking and taking measures which are likely to be damaging to their wealth in the long-term, such as trying to time exit and entry to markets, they should refer back to their financial plan, which should also be robust enough to withstand sudden or even sustained pressure from uncertain but anticipated negative events.

Once they’ve done this, they should find that perhaps they don’t need to worry too much after all. 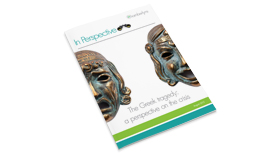 This page is in the following RSS feed:
Chamberlyns Articles